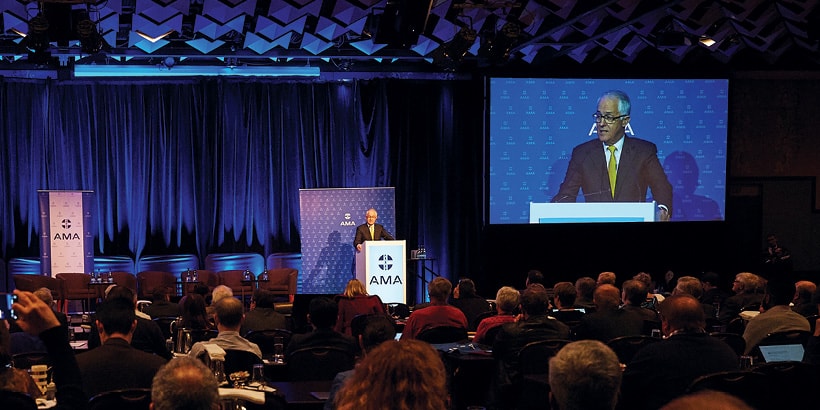 The AMA National Conference held in May recognised several medical professionals for their contribution to healthcare, the profession and the community. States and Territories were also applauded for media and advocacy.

Both medico-political leaders were recognised for their contributions to both the AMA and the medical professional.

AMA President, Dr Michael Gannon said that both of the new Fellows were distinguished representatives of the profession, and inspiring leaders who had fought hard for public health issues throughout their careers.

Dr Genevieve Goulding, an anaesthetist with a passion for doctors’ mental health and welfare, has been named the AMA Woman in Medicine for 2017.

“Dr Goulding has made an impressive contribution to the medical profession throughout her career, including during her term as President of the Australian and New Zealand College of Anaesthetists (ANZCA),” Dr Gannon said.

Dr Denis Lennox was presented with the AMA Excellence in Healthcare Award in recognition of his services to rural and remote healthcare in Queensland, and to training of rural doctors.

“Dr Lennox, an Adjunct Associate Professor at James Cook University and Executive Director of Rural and Remote Medical Support at Darling Downs Hospital Health Service, has had an extraordinary career since starting as a physician and medical administrator,” Dr Gannon said.

Eleanor Crighton, a nurse and midwife in the Northern Territory, is the winner of the AMA Women’s Health Award.

Ms Crighton was able to give Aboriginal women in greater Darwin access to affordable family planning at a time when no other clinic was offering a IUD service.

James Chapman, a second-year medical student won the 2017 AMA Indigenous Medical Scholarship – $10,000 a year for each year of study – to help him pursue his dream of becoming a medical professional.

Now in his second year, Mr Chapman intends to study at Wagga Wagga from his third year onwards to experience rural health, and rural and remote Indigenous health care. He hopes to become a GP, working with Indigenous women and children in rural and remote Australia.

Dr Phuong is the founder and director of the Water Well Project, a not-forprofit health promotion charity which improves the health and wellbeing of migrants, refugees, and asylum seekers by providing health literacy support and education.

Professor Bernard Pearn-Rowe, a long-serving and dedicated GP, who has been a constant advocate for general practice for almost three decades was presented with the AMA President’s Award.

Professor Bernard Pearn-Rowe has juggled maintaining his solo GP practice in Perth with his active roles in AMA WA medical politics, including a term as AMA WA President, and his appointment as Foundation Professor of Clinical Studies at the University of Notre Dame.

Dr William Glasson AO, the AMA President who steered a course through the medical indemnity crisis in the early 2000s, was recorgnised with the AMA Gold Medal.

Dr Glasson received the Medal in recognition of his exceptional service to the AMA at both the State and National level over many years, and his longterm and ongoing commitment to the eye health of Indigenous people.