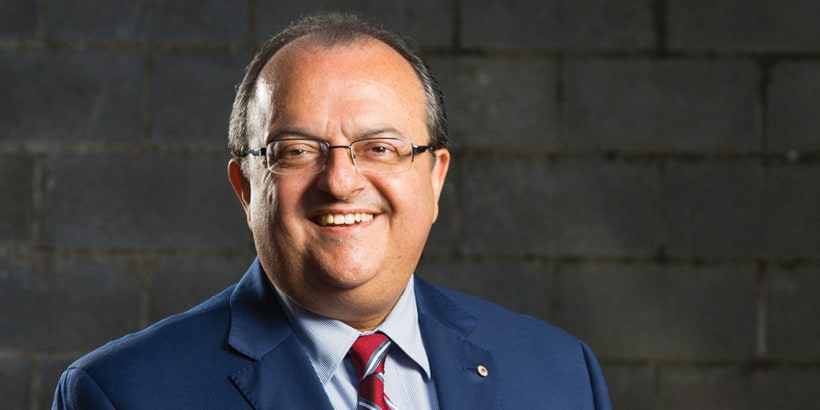 He may be known as ‘the rock doctor’ to the stars, but within the medical profession he’s famous for his commitment to advocacy, charity and the community.

ASSOCIATE PROFESSOR John Gullotta has his finger on the pulse of the entertainment industry – quite literally.

As Sydney’s ‘original rock doctor,’ A/Prof Gullotta is the go-to general practitioner for touring bands and celebrities, such as Pink, One Direction, Fleetwood Mac, Lenny Kravitz, Human Nature, Paris Hilton, and the like.

“It’s something I really enjoy doing. It’s not easy because you have to deal with a lot of egos, and they don’t like waiting – everything has to be done now. But I enjoy it. There are a lot of doctors they could choose from, but they go with me, which is a great honour.”

A/Prof Gullotta is one of a small group of doctors in Australia used by promoters and record labels. He started working with Australian acts when a friend, who was a promoter with Harbour Agency, approached him to provide medical support to local acts. Later on, he was asked to be the tour doctor for international acts when they play in Sydney. More recently, he has been working with television shows, such as The Voice and X Factor.

“It keeps me busy as a lot of acts come through and it’s mainly all after hours. Some don’t want a doctor there, but some do. Some even want you to be on the side stage,” he said. “I think it’s a safety blanket for them, as a lot of them are getting older. There are a lot of revival tours.”

Rock stars experience some career specific health issues, and this makes up what is known in the business as ‘rock medicine’.

With the death of CD sales, most bands rely on touring to make money, but it’s an incredibly stressful lifestyle. Late nights, erratic sleeping schedules, random meal times, frequent changes in time zones and the physical exertion of playing three-hour shows can take its toll on the body. There is also a lot of physical contact backstage with strangers – meet and greets with VIPS and radio show contest winners, which increases their chances of catching colds and viruses. For singers, nightly performances put an extra strain on the vocal cords. And when you rely on your voice to make a living, there is added pressure to take care of it.

“Basically you’ve got to be available and you’ve got to understand them,” A/Prof Gullotta said. “It’s not the way you normally would approach a patient, but you’re dealing with someone who has a concert, they might have a cold, or their voice might be hoarse and you’ve got to get onto it quickly.”

While A/Prof Gullotta could never have predicted that he would one day be staring down the throats of some of the world’s most famous singers, he’s always been sure of one thing. “Being a doctor is something I always wanted to be – even as a young boy I used to have the first aid kit and run around with my Band-Aids.”

A/Prof Gullota was an only child, but that didn’t stop him from trying to patch up friends and kids in the neighbourhood. He grew up in Sydney’s Matraville, where his
parents – both pharmacists – owned a chemist. In this environment, a career in healthcare seemed a natural choice. A/Prof Gullotta followed family tradition, first studying pharmacy at the University of Sydney, and after receiving his degree, attending the University of Newcastle to study medicine.

When it came time to open his own practice, he took over an existing one above his parents’ pharmacy in 1992, where he has been open for business ever since.

For years, A/Prof Gullotta watched his parents treat clients like family and that kind of ethos has been integral to the way he runs his medical practice. A/Prof Gullotta speaks Italian and is very involved in the community. He’s the doctor for the Italian Consulate, but also does a lot of pro bono work for elderly residents who need help with medical pensions. In turn, he has a very loyal patient base. He celebrated his 25th anniversary as a GP this year, and says he’s starting to see the babies he immunised over two decades ago come in with their own babies.

His silver anniversary also coincides with another very important milestone. After more than a decade, A/Prof Gullotta stepped down as Chair of the AMA (NSW) Charitable Foundation.

“I think the Foundation is very important,” A/Prof Gullotta said. “And I think the beauty about it is that it is run in a lean way. There’s no money wasted on administration and the money goes directly to the charities.”

The Charitable Foundation has a tradition of inviting the Australian of the Year to speak at its annual Gala Dinner event, and the charity is linked to their passion or cause. The Foundation also tends to support some of the lesserknown charities that don’t necessarily have a huge profile or attract the funding they deserve.

According to A/Prof Gullotta, there have been several highlights from his years with the charity.

He recalled the time country singer and Australian of the Year, Lee Kernaghan attended the Gala dinner in 2008. Known for his ‘Pass the Hat Around’ tours to raise money for drought-affected rural communities, Kernaghan made a similar overture during the Foundation event.

“He started it off with about $100 and then passed his cowboy hat around. That alone raised about $6000. Moments like that really stand out because it made such a tremendous difference to the lives of Australians.”

A/Prof Gullotta also remembered the year the Foundation raised money for Alzheimer’s Australia NSW. After speaking with one of the representatives from the charity, he realised that he had previously known her husband.

“Her husband was my insurance broker for 10 years, but then sold his business and retired. What I didn’t know at the time was that he had developed Alzheimer’s. So that made it very personal for me and made raising money for that organisation very gratifying.”

In addition to his work with the Charitable Foundation, A/Prof Gullotta has been very involved in medicopolitics. His interest was initially sparked in university and after he opened up his own practice, he joined his local division of general
practice. A/Prof Gullotta has served as President of the Eastern Suburbs Medical Association from 1999-2004, a member of the RACGP NSW Faculty Executive Committee from 1993-95, Foundation Secretary of the South Eastern Sydney Division of General Practice, and Chair of the Federal AMA Therapeutics Committee.

It was during one of these meetings with his local division, that a letter came from the AMA asking for a nominee to be on the Council of General Practice.

“Everyone looked around and I was the only AMA member. That was in 1992. So off I went and I joined Dr Robyn Napier’s AMA Council of General Practice, which I’m still on. And then I worked my way up.”

“The big issues during my presidency were all the remuneration issues, problems with the public hospitals, the beds, elective surgery – all of which is still going on. But the one thing that I was involved with – that I am most proud of – was getting the ban on smoking in NSW clubs and pubs. The minister then was Frank Sartor and we actually got that through. We did a big petition, which we presented to him on the steps of Parliament House.”

On his work with Federal AMA, A/ Prof Gullotta’s biggest achievement was to bring in streamlined authorities.

“So doctors didn’t have to ring up for every single authority item, which was a big red tape issue,” he said.

Somehow, he also finds time to teach at the University of Sydney – a challenge that keeps him up to date.

“I turned 52 this year and there are now doctors half my age. So it’s amazing and grounding.”

A/Prof Gullotta said he’s noticed a difference in the way people perceive general practitioners today compared to when he started.

“There’s been a bit of shift from the younger generation and that respect for GPs isn’t the same as it used to be. But we’re still here. Dr Google is our competitor, but I think at the end of the day there is nothing like a face-to-face consult.

He added, “You try to do your best and help people who come from all walks of life. And as a GP you have the opportunity to make a difference in people’s lives over a longer period of time. That’s the reason why I joined the Foundation – to give back to the profession and to society as a whole.”