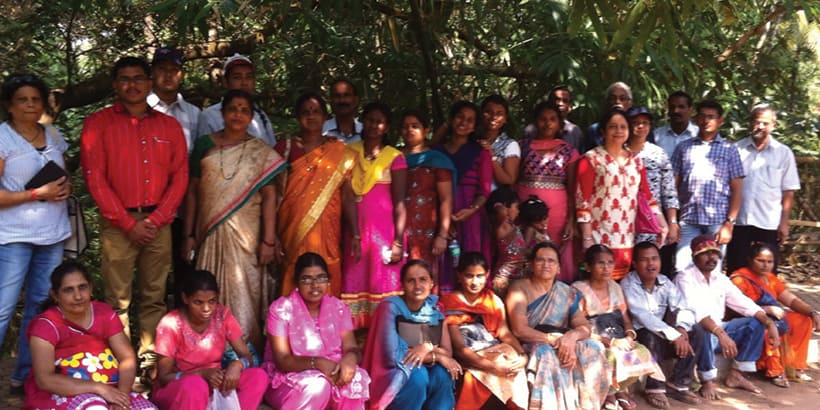 Just over a decade ago, psychiatrist Dr Naveen Chandra fulfilled his life-long dream to give back to the country of his birth and provide much-needed mental health services to rural areas in South India.

He established free psychiatric centres in three villages that previously had no mental health services available.

“This dream did not always seem attainable,” he says. “When discussing my idea for the project with friends in the early days, some discouraged me saying it would never work out due to government red tape and low public cooperation.”

His plan was to work six months a year on the project in India and spend the other six months in Australia with his family, while working as a locum.

In 2007, he approached several colleagues to probe their interest in volunteering overseas. While many supported the idea, they were unable to commit to the project.

“I was very fortunate to have Mr Vinaya Hegde as a generous sponsor for my project,” Dr Chandra says. “When I put together my proposal, he readily accepted it and unconditionally supported me with resources and connections to the local university.”

Having identified a helpful partner and a target area for the project, his first task was to identify the prevalent mental health issues that affect rural India.

Based on the General Health Questionnaire, he prepared a survey in the local language relevant to the local conditions and beliefs.

“It is important to adapt these questionnaires to ensure validity and understanding,” he says.

They utilised nursing students, who did door to door visits at every house in the village. The results gave Dr Chandra a clear picture of the mental health issues affecting residents in the area.

He then approached the superintendent of the local community hospital who agreed to give Dr Chandra two rooms in the out-patient department for his clinic. It was here that Nitte Rural Psychiatric Centre started.

“With the support of my wife, Sharitha, I started seeing psychiatric outpatients. She did the administrative work for the clinic and I did the consultation and treatment. We used the hospital pharmacy and were able to access free medicine. Meanwhile, NET supplied medicines that were not available in the hospital.”

Dr Chandra then successfully petitioned NET to appoint a social worker, who assisted them in starting two satellite psychiatric centres in nearby villages. The local Rotary Club offered Dr Chandra the use of their hall, where they established their rehabilitation centre, ‘Thudar’, which means ‘light’ in the local language.

They launched community programmes, including an outpatient department, with psychiatrists in attendance for five days. Dr Chandra says this accessibility was important for acute patients.

At the centre, patients make greeting cards and jewellery, and participate in yoga, games, information talks, and picnics.Lunch is provided and patients are given an incentive allowance to encourage attendance. As several patients could not afford the bus fare to attend, Dr Chandra enlisted the Nitte Engineering College bus to pick up patients free of cost.

Unfortunately, the college buses and private buses would not pick patients up from remote villages, which made it difficult for those patients to attend Thudar. However, with the help of donations they managed to buy a van for the centre.

He also started a 24/7 telephone line manned by volunteers – who were trained by a colleague during a weekend workshop. This was less successful, he says, due to a cultural reluctance to disturb staff from their sleep and to discuss problems over the telephone.

One of his more innovative methods of raising awareness of mental illness was through the creation of a street play team, named ‘Parivarthana’, which means ‘transformation’ in the local language.

“These voluntary actors performed plays about schizophrenia, depression and alcoholism, specifically in marketplaces, bus stands, public places, etc. These plays were successful in getting our message across, and we found it the best way to communicate with the population, as many of the rural older population were illiterate.”

He also printed fact sheets in the local language about different psychiatric illnesses. He found patients were pleased that he was giving them information about their illness, as “many conveyed that their doctors had no time to explain the illness in such detail,” he says.

Dr Chandra started an alcohol detox program at the government hospital with the help of Prof Suresh Kamath, a staff member of the hospital. After the patients were discharged, they ensured they were followed up at the clinic by a social worker who counselled the patients as well as their spouses.

He also organised home community visits by a social worker to assess acute cases and to follow up the chronic patients. This helped to make the service accessible to those who were less mobile due to chronic physical illness or to the ones reluctant to attend because of their psychiatric condition.

While Dr Chandra made significant progress in bringing mental health services to a previously unserviced rural area in India, he faced several difficulties – many related to staffing.

“We tried to computerise our case histories but did not succeed due to technical problems and not having regular staff members,” he recalls, adding that staffing became a more significant consideration as he prepared to return to Australia. Fortunately, two private psychiatrists agreed to carry on with his work at Nitte.

Attracting doctors to work in remote areas was another difficulty, which he solved by training community nurses to identify mental illness.

As with any project, finding the funding necessary to get it off the ground and keep it running was a significant challenge.

“To support the project, I organised a charity lunch in Sydney, and with the help of support and donations from family and friends, I am proud to say that we raised 2,700,000 Indian Rupees. This was alongside the jewellery that Sharitha made and sold to support the project.”

When the Nitte Psychiatric Centre had enough funds to build a new centre, Dr Chandra approached NET’s Mr Hegde who suggested that they build a larger centre and offered a contribution to help them do it. The centre was called ‘Vakil Perodi Shambha Shetty Memorial Psychiatric and Medical Centre’, after Dr Chandra’s father and opened its doors in 2013. The psychiatric outpatient section, Thudar rehabilitation centre, dental department, medical OP and minor operation theatre for surgery are now housed in this building.

Over the years in which Dr Chandra was establishing and running this project, he held three international psychiatric conferences: ‘Rural Psychiatry – Road Least Travelled’ in 2009, ‘Mind the Gap’ in 2011 and ‘Beyond Symptoms Control’ in 2015. Dr Chandra says the feedback received was overwhelming and delegates got a first-hand insight into problems in the rural areas and service models that may work in these contexts.

It was during his last visit at the end of 2015, that he felt that he had done as much as he could from a volunteer perspective. Subsequently, he decided that it was time to hand over the centre to Nitte University.

Currently, the centre has around 5,000 patients on its books and treats about 200 outpatients a week. The Thudar rehabilitation centre has 12-15 regular patients and has placed 10-12 patients on part-time or full-time employment.

“I am proud to say that I have been able to set the centre up so that it will serve the rural psychiatric population of the area for several years to come,” he says.

“In summary, from my experience, a successful rural project needs as a minimum: a supportive sponsor, convenient transport, knowledge of local language and culture, support of the local community, connections to local institutions, a follow up plan for the future, and the ability to raise funds. One major issue will always be encouraging staff to work in rural areas. Incentives like rural allowance or accommodation and employing local people, if available, is always a good option. We trained the community nurses and volunteers as there were no doctors in these remote areas. The project was a great success which exceeded everyone’s expectation, including my own.

“I hope this will help people understand, although it is hard, it is not impossible to do voluntary work in a rural area, sometimes it is where it is needed the most.”