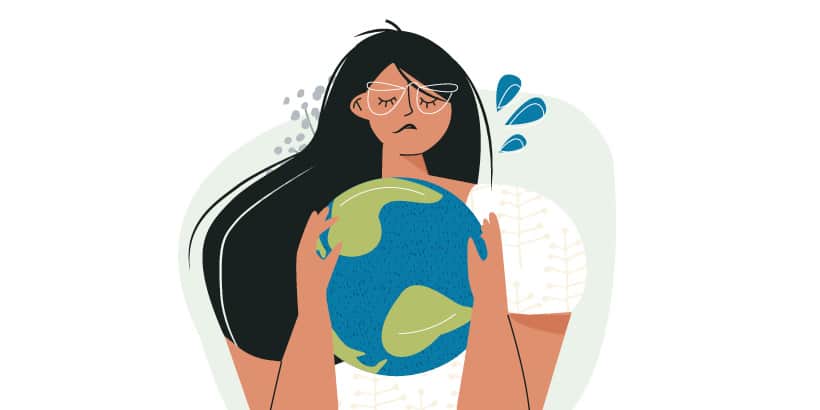 Psychiatrist Dr Cybele Dey is raising awareness about the impact of climate change on our mental health.

LIKE MANY PEOPLE living on the east coast of Australia during the devastating Summer of Fires in late 2019-early 2020, Dr Cybele Dey, a child and adolescent psychiatrist, experienced smoke across the city and watched in horror and disbelief at the news of the unprecedented fires’ destruction.

“Pleading via text message with my relatives to evacuate before it was too late was stressful as an adult…and yet nowhere near as frightening as for an eight-year-old patient of mine, whose parents volunteered with the Rural Fire Service, waiting for them to return from fighting the fires,” Dr Dey recalls.

“At work, smoke from the fires created its own set of problems. As a staff specialist in Psychological Medicine at The Sydney Children’s Hospital Network, the rural telehealth clinic had no other child psychiatry. Their fly-in, fly-out psychiatrist was unable to get there as flights were stopped due to the smoke.”

Despite working in child and adolescent mental health since 2001, it was only after reading the literature on the effects of climate change on the mental health of children and teenagers that Dr Dey realised the extent of this issue.

“At first, raising the subject of research on climate change-driven increased extreme weather events and rising temperatures being linked to negative impacts on child mental health was often met with scepticism, even from otherwise open-minded friends and colleagues.

“Yet, I could not ignore the substantial published medical evidence of links between increasing serious self-harm, including mental health admissions and deaths from suicide, and hotter and more humid weather.”

The American Psychiatric Association’s November 2019 statement on Climate Change and Mental Health recognises the impact of extreme weather and heat on mental health, and the UK Royal College of Psychiatrists’ May 2021 position states there is “firm evidence of a link between hot weather and higher suicide rates” and that “hotter weather is linked to higher use of mental health services.”

Despite the growing evidence of mental health harms of hotter, humid weather from overseas, in Australia, which has some of the most significant rises in annual temperature in the developed world (State of the Climate 2020), local research is urgently needed.

Opportunities to raise awareness of the issue have included an expert panel discussion on climate change and mental health, correcting misinformation, and co-authoring a report, How Climate Change affects Mental Health in Australia. Within the RANZCP, Dr Dey has facilitated the participation of Professor Tim Flannery, one of Australia’s leading writers on climate change, as the keynote speaker for the RANZCP 2022 Congress in Sydney.

“Over 50% of health professionals in Australia are ‘alarmed’ about the health impacts of climate change, and yet many feel unsure what to do and are unaware of how much difference they can make.”

With the thought of “doing something” about the problem of climate change, Dr Dey joined medical advocacy group Doctors for the Environment Australia (DEA) in late 2019 and is now the co-chair of DEA’s Mental Health Working Group. A highlight was when the Royal Australian and New Zealand College of Psychiatrists (RANZCP) joined many other medical colleges at the Australian Medical Association and Doctors for the Environment Australia Webinar.

“As I became involved, I grew more aware, more productive but also less isolated and less distressed. It became easier to ‘hold’ awareness without feeling overwhelmed about the terrible news from the sixth Intergovernmental Panel on Climate Change (IPCC) report which detailed how the Earth will face dire consequences if strong actions on climate are not taken.

“Being with like-minded colleagues also provided the opportunity to share the frustrations and distress and to take ‘values-based action,’ part of healthy coping. As one colleague said, “[being part of DEA] is my antidepressant”. Other excellent sources of support for concern about climate change include Psychology For A Safe Climate and The Climate Resilience Network.

“At the same time, the seriousness of what is at stake remains a powerful motivator, and medical practitioners are in a unique position as trusted messengers of health information,” Dr Dey said.

“For psychiatrists, among others, a core competency is to ‘…use their expertise and influence to advocate on behalf of individual patients, their families, and carers, as well as more broadly, on an epidemiological level’.

“Following COP26, even with the best scenarios, the current trajectory for global warming from anthropogenic (human-induced) climate change is over 2 degrees. The mental health impacts alone, of rising mental distress, rising suicidal behaviour in adolescents, interpersonal violence from heat and humidity, the compounding effects of trauma – not to mention food insecurity, environmental refugees and increasing mental health problems from rising physical illnesses – are almost too much to contemplate.

“Without accepting the scientific reality, we may lack the resolve needed for the urgent cutting of fossil fuels and transition to renewable energy that is still possible now to reduce these health harms.”

Dr Dey added, “I’m inspired by a quote from environmental activist, Buddhist scholar and systems theorist, Joanna Macy, that Dr Anna Seth, co-chair of DEA’s Mental Health Working Group, shared with me: “You don’t need to do everything. Do what calls your heart; effective action comes from love. It is unstoppable, and it is enough.”