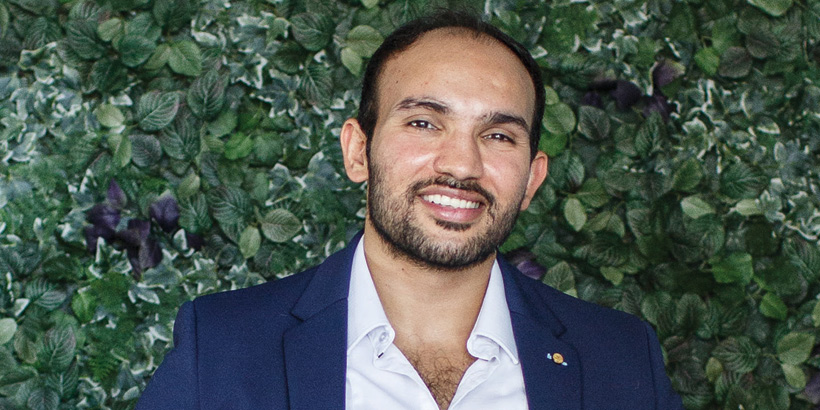 As a general practitioner and Clinical Director of Governance for WentWest, Dr Jaspreet Saini has a multi-focal perspective on primary care.

It was the last leg of their family vacation in India. Dr Jaspreet Saini’s family was travelling from Punjab to Delhi, where they planned to fly back to Australia. His parents had hired a private driver to take them the almost 400 kilometres to the airport. Two-thirds of the way through the trip, the driver had a micro-sleep at the wheel.

Drifting into the oncoming lane, the hired car collided with a truck, which nearly forced their 4-wheel-drive off the bridge and into – what would have been certain death – the water below.

Dr Saini, who was only 10 years old at the time, was sitting in the backseat playing cards with his little sister. Remarkably, his parents and his sister were relatively unscathed by the accident. Dr Saini however, was not. During the horrific crash a metal pole came flying through the front windshield of the car striking him in the middle of the face.

His family rushed him to a local public hospital. It had no electricity. The medical staff were going to do a quick clean and a few stitches, using unsterile equipment and in bad lighting conditions.

Fortunately, a taxi driver offered to take them free of charge to a nearby private hospital. The difference between the two facilities cannot be overstated. In addition to being a clean and modern environment, the facility employed a plastic surgeon with 25 years’ experience. The doctor ended up doing 32 stitches across his eyebrows and nose.

The experience had a profound effect on Dr Saini.

“That showed to me the potential that existed within medicine to be able to help people when they are at their most vulnerable and that really touched me and inspired me to pursue a career in medicine,” said Dr Saini, who – two decades later – now works as a general practitioner in Blacktown.

Despite pointing out evidence to the contrary, Dr Saini insists he was lucky.

“It could have been a lot worse. Everything was stacked against us in terms of where the accident occurred. It was a 4-wheel drive against a truck and both going at reasonably high speeds,” he said. “In the grand scheme of things we were very fortunate that my parents and sister were ok and really it was just a metal pole and I was able to be operated on by a good surgeon.”

It’s that same glass half full optimism that makes Dr Saini a good doctor – his ability to turn what some might view as a negative experience into a character building moment.

He describes his years as a medical student as being hugely challenging – not so much in terms of learning the volumes of material (that’s a given), but the feeling of isolation from his family and friends.

Dr Saini was born in India, but moved to Australia when he was two years old. Since then, he’s called Blacktown home for most of his life.

His parents, which he speaks of with incredible fondness, first lived in a block of units, before moving to a small house, and then eventually trading up to the bigger house they live in today. While his parents weren’t particularly well off, Dr Saini says they prioritised the education of their children.

“Essentially, they left no stone unturned to make sure my sister and I received an education that would help enable us to achieve what we wanted to achieve. Mum and Dad worked very hard to try and support us. We got the bare basics and that was about it. But what we did get as a luxury was education.”

So when he left home in 2006 to go to medical school at Monash University in Melbourne, it was a decision his family supported, but one that separated him for his close-knit community and support network.

“It was definitely a challenge. I lived out of a suitcase for much of university, because there were some years there that I would have to move every six weeks from one place to another.” Dr Saini spent a lot of time in country Victoria. He recalls one particular stint in Moe, Victoria – a mining and farming town of about 15,000 people. His student accommodation was about a kilometre from the next closest living soul. The funeral parlour, however, was right across the street. The funeral parlour was actually connected to the local hospital via an underground tunnel, which was used as a direct means of transporting bodies.

“It was absolutely spooky. I did have a housemate at the time, but she would go and visit her family on the weekends, so on the weekends it was just me completely alone. Where I’m from in India, we have these preconceptions that it’s going to be haunted and that was a very frightening experience to be around a funeral parlour.”

He jokes lightly about his fear of ghosts, but what was real was the loneliness he felt at this time.

Upon graduation, Dr Saini was accepted into an internship at Blacktown Hospital. The homecoming couldn’t have come at a better time.

“Internship is really, for all doctors, an incredibly challenging experience, so being around family at that time was so necessary for me.”

His interest wavered between anaesthetics, surgery and paediatrics, which made choosing a specialty pathway very difficult. However, in general practice he saw an opportunity to do a little bit of everything he enjoyed. It also gave him a chance to build relationships with patients and follow them along their journeys through life.

Anyone who has had even the slightest interaction with Dr Saini will realise this is what’s called “playing to one’s strengths”.

Dr Saini exudes a warmth that cannot be taught in medical school. Soft-spoken and affable, he’s immediately likeable and it’s easy to see why he’s so well-suited to this specialty.

He credits Dr Michael Crampton for providing a blueprint to being the kind of doctor he wanted to be.
“I had the opportunity to work with him at his practice, which was one of the most amazing experiences I’ve ever had. I had met a man who was very passionate and caring to his patients, who knew his patients very well, but beyond that his patients knew him very well. He was the epitome of someone who knew how to build relationships and rapport with people. And when I compared my experiences with my colleagues I realised how absolutely fortunate I was to start off my career in general practice with someone I respected so much.

“He showed me what general practice can be if you’re doing it correctly. And I think he’s the one who really cemented my desire to be a good GP.”

“He provided me with an opportunity to work within an organisation that looks at how we can do things better in health.”

In terms of his personal life, he pays homage to his wife, Gurleen.

“She is such a tremendous support for me, and incredibly patient in the face of odd hours, meetings that go till late in the evening, and work/study that can often stretch into our personal lives.”

In addition to working at The Practice in Blacktown (yes, that’s name of medical centre where Dr Saini works), he spends two days a week as the Director of Clinical Governance for WentWest.

WentWest is the primary health network for the western Sydney community. Its remit is to deliver support and education to primary care and work with key partners to improve the region’s health system. In addition to overseeing the safety, risk and accountability of programs being delivered, Dr Saini looks at ways to increase the quality of those activities.

He also looks at how WentWest can engage GPs in practice transformation, as well as the means of delivering education in the community and whether that involves GPs, nurses or allied health members. These activities are conducted with input from the clinical council, which is composed of members of various health professions within primary care, as well as a consumer council.

“It’s definitely rewarding. The opportunity to roll out programs on a regional level and provide regional leadership is quite crucial because it means we can start forming strong relationships with people who are actually operating on the ground and making things work. We’ve got some practices that are quite heavily involved in the Health Care Home trials and been trying to genuinely make a difference in the way they care for patients and to go out into practices, see what they’re doing, see what the challenges and barriers are and support some of those activities is actually quite outstanding.”

According to Dr Saini, the biggest problem in delivering healthcare at the moment is fragmentation. Medical practitioners continue to work in silos, rather than a functional and collaborative system. The other major failure is lack of data.

“In an ideal future, healthcare teams will have a good understanding of their patient population. They’ll have access to data, they’ll have access to information that will help them make decisions and work with the people that they serve to make those decisions. We’ll have patients that are able to look at data in a very transparent manner and help them navigate a system that is friendlier and designed around them, rather than it being designed for the doctors.”

Being able to balance his own practice work with his work at WentWest gives Dr Saini both a close-up view of the day-to-day challenges of being a GP, as well as a long view on primary care and the opportunities that exist to make it better.

“When you work in a traditional general practice facility, you’re trying your absolute best to keep the boat afloat, so to speak, and just make sure that you’re operating at a safe and competent manner, where you’re putting your patients first.

“But you don’t really get to experience anything that changes the dynamic of general practice or start looking at how we can work better with our specialist colleagues in hospital, or how we can start working better with our allied health colleagues – there just isn’t that opportunity. So, having two days to just think about those things, to contribute ideas, to learn from others and having a bit of head space where you’re not just looking after patients, but actually starting to think about ways you can better do that is just an amazing thing to be able to do.”