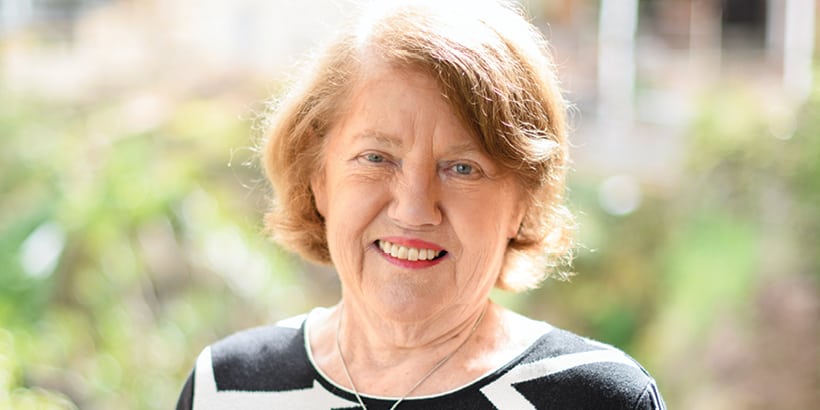 50-year member and former Chief Health Officer for NSW, Dr Sue Morey AM has been an important figure in the maturation of public health medicine in Australia.

When Dr Sue Morey graduated medical school from Sydney University in 1967, her understanding of public health medicine was limited.

“As a medical student, 50 years ago, I remember little of what we were taught in Public Health lectures. I think we learned how to dig a deep pit latrine, but that was certainly not an inspiration for a future career for a young medical student. At that time, I would never have imagined the directions in which my medical career would take me,” Dr Sue Morey stated in her 2016 oration for the RACP Congress, titled “What Would Redfern Think?”

Upon graduation from med school, Dr Morey became a medical registrar at Royal Prince Alfred Hospital. This marked the beginning of her association with the hospital that would span more than two decades.

In 1969, as a medical registrar on rotation from RPA, Dr Morey worked in Papua New Guinea. It was during this time that, “I learned that the country’s health problems were not going to be solved solely by doctors caring for individuals, and I learned to think about the economics of health, practising in an area where the health budget of the entire country was less than that of the hospital in which I worked in Sydney.”

After her rotation in PNG, Dr Morey passed the membership of the College of Physicians and went overseas to work in England. She returned after a couple years and became involved with what was then a new concept – community health services. The area around RPA was very under-privileged and, at the time, there was concern that more should be done for residents in the local area.

This led to development of community health services in Glebe and Newtown, and Dr Morey was there from the beginning. She was introduced to the concept of public health as a concern for a defined population – defining the characteristics and health problems of that community, identifying gaps in the services and then developing services to fill those gaps. As they were connected to a major tertiary hospital, they had access to specialists and integrated care. Not only did they offer community-based allied health and mental health services, but also a diabetic clinic, an antenatal clinic for pregnant teens, and services for alcohol and drugs, health promotion, palliative care and geriatrics.

Dr Morey worked as a Co-ordinator of Services in the Community Care Teaching Unit at RPA from 1972 to 1976. They gave students projects that linked the clinical care provided by GPs and specialists with the epidemiology and preventative aspects of specific diseases.

In 1976, Dr Morey was promoted to Head of the Department of Community Medicine at RPA. Three years later, in 1979, Dr Morey did a Masters of Public Health at Harvard – an experience she describes as one of the “great highlights of my career.”

It was during this time that she learned the academic discipline that underpinned the work she was doing in Australia.

In 1981, Dr Morey was also made RPA’s Head of the Division of Community and Allied Sciences. This coincided with her involvement with a small group of doctors working in Community Medicine who met to discuss the need to develop registrar positions that would assist students in public health to move from theory into practice.

According to Dr Morey, Australia was one of the last English-speaking countries to formalise training in public health medicine.

Dr Morey helped form the Australian Association of Community Physicians in 1985 and served as President from 1986 to 1988. The RACP Council accepted a proposal to form a Faculty in 1988 but preferred the term Public Health Medicine to Community Medicine. Dr Morey was chosen to be the Foundation President of the Australasian (initially Australian) Faculty of Public Health Medicine of the Royal Australasian College of Physicians (1990-1993).

The Faculty established the term “public health physician”, which is now recognised, and created an accredited training program.

She served as Chief Health Officer for NSW from 1988 to 1994, and describes this as “a very difficult and privileged position” as it allowed her to be involved with all of the key policy-making bodies – medical boards, the National Health and Medical Research Council, the Health Minister’s Advisory Council, and more.

She turned her attention to the link between health inequalities for people living in regional and rural Australia, and access to doctors and clinical care. With Jack Best, she became involved in the feasibility studies and establishment of most of the University Departments of Rural Health and many Rural Clinical Schools.

Underpinning this work was the idea that students trained in a rural location would want to remain there. Now more than a third of medical students each year are doing a minimum of one year’s clinical training in rural and regional Australia.

In 1999, Dr Morey was made a Member of the Order of Australia for her service to the development and promotion of improved public health services.

She continues to work as a Health Services Consultant and serves on the Council of the Medical Benevolent Association of NSW.