A Toolkit for GPs in NSW 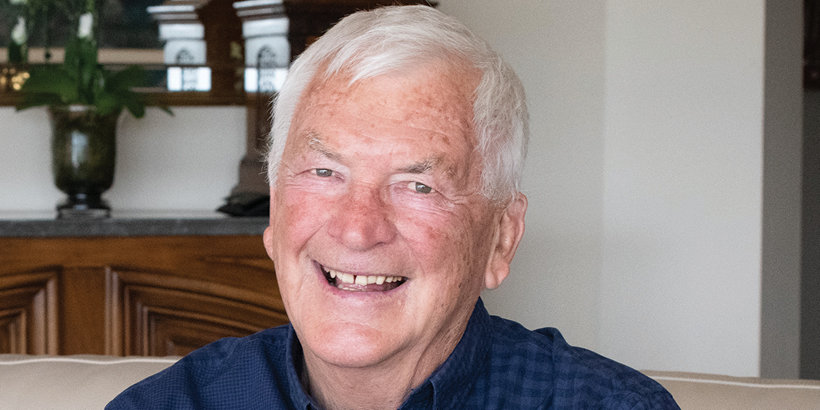 His career has taken him around the world. Not only did he gain a lifelong love of New York but learned techniques that helped shape ophthalmology in Australia.

In 1970, with three children (one of whom was only one month old) Dr George Thomson and his wife relocated from Australia to New York.

Dr Thomson had successfully secured a research fellowship under Dr Richard Troutman – a pioneer of microsurgery in cataract and corneal surgery and Professor of Ophthalmology at Downstate University in Brooklyn. He was also head of the ophthalmological surgical department at the Manhattan Eye and Ear Hospital.

“The reason I was able to go was I inherited an apartment right next to Central Park, just across from the skating rink on 59th Street,” Dr Thomson recalls.

Despite being told by his predecessor that the apartment would be furnished, all they found when they arrived were cocktail glasses. Welcome to New York.

Dr Thomson always wanted to be a doctor. His father was a surgeon and physician, and that early exposure to medicine had piqued his interest.

After graduating from medicine in 1963, he did his first-year residency at Wollongong Hospital in 1964, during which time he married his wife, Pamela. The following year, they moved to Adelaide for his second-year residency at the Royal Adelaide Hospital.

The doctor he related best to was a neuro-ophthalmologist, and Dr Thomson’s interest in ophthalmology grew from there.

In 1967-68, he did a teaching fellowship in the Anatomy Department of Adelaide University and prepared for the primary ophthalmology exams. During this time, he took the ECMFG which would allow him to work in the US, and he celebrated the birth of his first daughter.

He moved back to Sydney to take the primary at Sydney University and did his training at Sydney Eye Hospital. After 18 months as a registrar, and 18 months as a clinical superintendent he obtained the second part of his post-graduate exams and had two more daughters.

It was at this point that the opportunity to train in New York came up. He describes the experience as a milestone in his career.

“Microsurgery hadn’t really reached Australia at that stage – it was being used in a very limited way,” he recalls. “I was lucky enough to be trained in it.”

During his fellowship in New York, Dr Thomson gained experience in corneal grafting and corneal refractive surgery. He also worked in the Manhattan Eye Bank (the first eye bank in the world), collecting and preparing donor corneas for surgery.

After nearly two years in New York, Dr Thomson returned to Australia. He did some locuming and then joined a group ophthalmic practice in Parramatta. He was also on staff at Lidcombe Hospital and assisted with the design of the operating theatres in the new surgical wing.

Drawing on his experience overseas, Dr Thomson was central in overseeing the placement of the first ceiling mounted microscope in Australia at Lidcombe, which included closed circuit television and was a valuable teaching tool.

He was also on staff at Parramatta Hospital, which relocated to the Westmead Centre in 1978. Three years later, Dr Thomson set up a solo practice.

Dr Thomson was also very involved in the Royal Australian and New Zealand College of Ophthalmologists, serving as the chair of the cataract implant and daycare committee, conducting workshops in cataract removal followed by intraocular lens placement.

In addition, Dr Thomson led several workshops in cataract removal techniques and one on Radial Keratectomy.

He served as the assistant editor of the RANZCO Journal, a committee member of Ophthalmic Research Association of Australia, Secretary of the Ophthalmic Association of Surgeons, and Consultant to the TGA on ophthalmic devices.

He became a foundation member of the Australian Society of Cataract and Refractive Surgeons in 1969 and remained on the organising committee until 2009.

In 1978, Dr Thomson joined the American Society of Cataract and Refractive Surgery, and in 1995 was made a member of the International Intraocular Lens Society.

He has also served as an Ophthalmic Consultant to the Sydney Eye Bank.

“Ophthalmology has moved enormously since I started doing it. The progress has been incredible. These intraocular lenses – I was lucky enough to be a pioneer in that, and really what I feel is my biggest contribution to ophthalmology.”