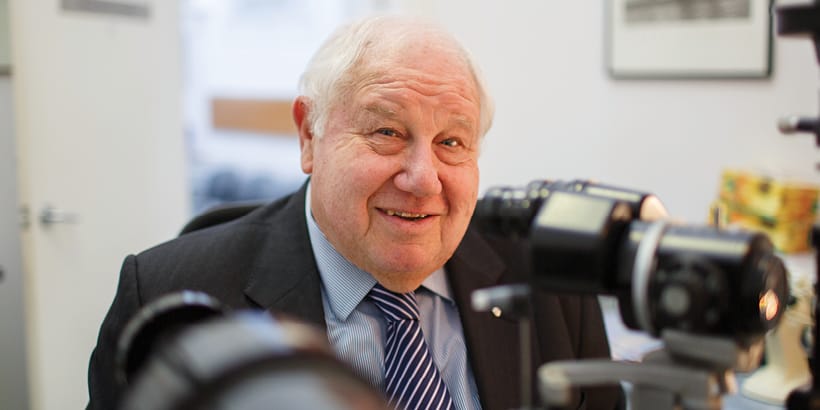 Former AMA (NSW) President, Dr Michael Steiner celebrates a half century as an AMA member and decades working in medico-politics.

Dr Michael Steiner recalls one particularly memorable patient – a deaf, elderly woman with dense white cataracts who had been living in a nursing home for close to a decade. She hadn’t spoken or communicated with anyone in a very long time and spent her days expressionless, sitting in a corner on her own. Her family and care workers thought she had dementia.

Dr Steiner was concerned she had no sensory input and that might have been contributing to her isolation. He operated on one eye to see if it would make a difference.

“The family brought her in the next day and she had a pad over the eye. They led her into my consulting room, and we took off the pad and suddenly this woman who’d had had no expression for 10 years broke into the hugest smile.

Medicine has changed phenomenally since he graduated from Sydney University in 1970, and perhaps most remarkably in the specialty of ophthalmology.

“It has changed immensely,” Dr Steiner says. “Particularly in one of the most common surgeries, known as cataract surgery. In the old days you took out the cataract lens and the patient was given a thick pair of glasses and their vision was quite difficult. Now we take out the lens through a tiny little incision about two millimetres, no stitches, we put in an artificial implant, correct their vision and they often see better than they’ve ever seen before without glasses.”

When faced with the prospect of losing their vision and, subsequently their independence, Dr Steiner says it was not uncommon to hear people say they’d rather be dead than blind. However, the advances in ophthalmology have vastly improved health outcomes for patients.

“The quality of life changes that we can offer with modern ophthalmology are just so vast,” he adds.

Dr Steiner was born in Prague in 1946. At age two, he immigrated to Sydney with his parents, who were both Holocaust survivors.

“My parents were very strong believers in a good education and booked me into a good school when we’d been here for about six weeks,” he says, adding “like most migrants, one did one’s best at school.” Dr Steiner was no exception.

A good student, he was interested in medicine – drawn by the respect and esteem afforded to doctors and ability to help people and the community.

“I’d always been impressed by the family GP – in those days one grew up respecting one’s doctor.”

After graduating medical school as an RMO at Sydney Hospital he did a five-week term at the Sydney Eye Hospital, which proved to be life-changing.

“I was fascinated with the equipment, with the people, with the eye itself and the things we could do. The eye is just such a wonderful organ, so complex and really quite beautiful and I just fell in love with the specialty in that five weeks. By the time that five weeks was up, I talked to the boss at the eye hospital to ask how to get into ophthalmology.”

After becoming a Fellow of the Royal Australian and New Zealand College of Ophthalmologists (RANZCO) in 1974 he was appointed an Honorary Ophthalmic Surgeon to Bankstown & Lewisham Hospitals, where he served until 1984.

During this time, Dr Steiner pioneered intraocular lens implantations for cataract in both of these institutions.

Following this, he served as Chair of the surgical staff at the (Private) Metropolitan Eye Hospital for many years, as well as co-chair of the Ophthalmology Medical Advisory Committee of the NSW Eye Centre at Sydney Private.

He has been performing laser vision correction since it was first introduced to Australia in 1991 and is a Foundation Member of the Australasian Society of Cataract and Refractive Surgeons.

Dr Steiner’s foray into medico-politics started when he was registrar at the Sydney Eye Hospital. At the time, he says the pay was horrendous. Consequently, the union organised for RMOs and registrars to rally together and they held a two-hour stop work meeting at Town Hall to get an increase to a time and a quarter for hours worked between 8pm and 8am.

“There I was in my whites down at the Town Hall…but we managed to get time and a quarter, and we felt we’d made a difference.”

He adds, “and when we got our pay for that fortnight, we had been docked two hours because of that meeting!”

Dr Steiner has also been a prominent figure in the AMA – both at the State and Federal level. He served as AMA (NSW) President from 2010-2012. He also served recently as President of the Australian Society of Ophthalmologists and he’s currently the Immediate Past President of that organisation.

In his years working in medico-politics, Dr Steiner has been involved in many battles with Government, including the 1984 Doctors’ Dispute. And while threats to medicine come and go, he says one of the biggest challenges now is corporatisation.

“It’s more difficult to set up a practice now – there’s so much more red tape and expensive equipment – for a lot of doctors, it’s just too difficult,” he says. “And I’m not sure that it’s good for patients.”

As for himself, Dr Steiner has no intention of retiring. “I’ve built up a practice that I enjoy working in, I enjoy going to work. I have excellent staff, I like my patients I’ve taught myself a few words in about 10 languages to help me examine them – an important thing in one of Sydney’s most multicultural areas.”

For those just starting out, Dr Steiner’s advice is to never lose sight of what’s really important.

“Make sure you spend time with your children because they grow up so quickly. All of the rest is of relative insignificance to the relationship with your kids. What we do shouldn’t be in any way minimised, but my advice to the young doctors is please don’t neglect your families because nothing is as important as that.”

Each year, AMA (NSW) hosts a special celebration to acknowledge doctors who have been AMA members for 50 years to thank them for their continuous support of our organisation and the medical profession. The NSW Doctor is featuring some of our 50-year members in this edition and the upcoming November/December issue. These doctors are remarkable not only for their contribution to medicine, but for their commitment to patients and involvement in medico-politics.