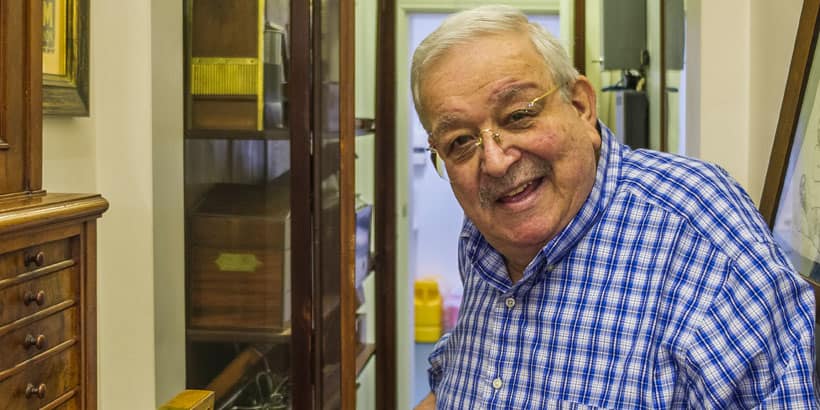 A/Prof E.P. Kremer OAM is a man of many pursuits – letting professional curiousity and world adventure guide him through medicine and life.

It’s taken nearly 50 years, but the Government has finally recognised the sacrifice and bravery of Australian doctors and nurses who served as members of the Southeast Asia Treaty Organisation (SEATO) surgical civilian medical teams in Vietnam.

From 1 July 2020, doctors and nurses who provided medical aid, training and treatment to local Vietnamese people during the Vietnam War are eligible for the Department of Veterans’ Affairs (DVA) Gold Card.

“It was a long battle to get the Government to finally recognise us,” says A/Prof E.P. Kremer, who flagged the Government’s acknowledgment as one of the highlights of his career.

A junior doctor at the time, A/Prof Kremer was persuaded by his mentor, Prof Vernon Barling, a senior surgeon at Royal Prince Alfred Hospital, to join a surgical team to Vietnam.

“He said, ‘Ted, you’ve got to go because you’ll get more experience there in a month than you’ll get anywhere else in five years.’”

Almost 450 doctors, nurses, radiographers, and anaesthetists from Australia’s teaching hospitals raised their hands to participate on surgical teams in the Vietnam war zone between 1964 and 1972.

Australia entered the Vietnam War in 1962, and as the fighting escalated a request was made to boost medical infrastructure in the area to deal with the increasing numbers of wounded soldiers and civilians. The first medical team from the Royal Melbourne Hospital was sent in 1964.

A/Prof Kremer joined a medical team from Royal Adelaide in 1970 and stayed for just over a month.

“As a very junior doctor, I stayed in the background and did what I was told and got a tremendous amount of experience.”

A/Prof Kremer was a good candidate to send to the conflict, as it wasn’t his first. Just three years prior he had spent a month during the Six-Day War in Israel assisting with intensive plastic burns surgery.

In Vietnam, at the age of 25, – A/Prof Kremer was one of the youngest members to serve on the surgical teams. He’s now one of only 72 of the medical professionals that served in Vietnam left. Many doctors and nurses worked in shocking conditions, alongside the military, and suffered the same kinds of illnesses as returning soldiers – insomnia, nightmares, flashbacks, depression – symptoms of Post-Traumatic Stress Disorder. But because they were civilians, they did not qualify for Veterans’ Affairs gold cards to cover their medical costs. Instead they were told to get assistance through Comcare, which ceases to provide support after age 65. As many have passed that milestone, they are beyond Comcare’s remit.

“As of 1 July, I managed to achieve something that has taken 49 years – that feels like a pretty big achievement.”

But it’s just one of many in A/Prof Kremer’s life.

A/Prof Kremer was perhaps destined to seek adventure is different parts of the world. He was born in 1945 in Harbin, known as the Ice City of China for its dramatic ice sculptures. It was also a refuge for Russian white émigrés – many of whom participated in the White movement and fled during the Russian revolution. By 1917, Harbin’s population reached 100,000, with an ethnic Russian population of 40,000.

But the rise of Communism convinced his parents to leave China, and in 1951 they found their way to Australia.

A/Prof Kremer’s family settled in Sydney, and when the time came to choose an area of study, he picked up where his father left off.

“Medicine is just something I always wanted to do,” Dr Kremer says. “My father did two years of medicine in 1936 and then the war started and he didn’t get a chance to finish.”

What really sets A/Prof Kremer’s career in medicine apart is his variety of practice.

“I’ve done 35 years of neuro orthopaedics, I did over 30 years of plastic surgery, I did obstetrics and gynaecology for 15 years, and this is all on top of full general practice. I’m not really like the modern graduates – I’m pretty highly skilled in various avenues.”

A/Prof Kremer finished medical school in 1969 and started his training at the Crown Street Women’s Hospital to become an obstetrician/gynaecologist.

“And I suddenly realised that I wanted to practice a bit further than the female pelvis. And that’s when I decided not to do full-time O&G and I went into general practice, because that meant I could look after an entire person and their family.

A/Prof Kremer continued to train in obstetrics and gynaecology, as well as general practice.

“I was on at Crown Street, St Margarets, St Luke’s, and also, of course, at Eastern Suburbs. And as they closed one by one, I decided that it was time to stop.”

During this time, A/Prof Kremer – who had a passion for photography – was asked by the former head of neurosurgery at Royal Prince Alfred, Dr John Segelov AM, to illustrate one of his papers with photography. Soon after, Dr Segelov asked Dr Kremer to assist him.

“So, for 40 years I worked with him until he died. We operated two and three days a week and we worked very late. We also worked at Liverpool Hospital. I did a tremendous amount of neuro orthopaedic surgery with him, mainly spines.”

A/Prof Kremer also connected with the former head of plastic and reconstructive surgery at Prince of Wales Dr Barrie Milroy.

“He was probably the best trained plastic surgeon that I’d ever met and I’ll tell you, I’ve met a few. And Barrie similarly asked me if I’d like to assist him on a regular basis, so I worked with him for two or three afternoons a week as well.”

Dr Kremer assisted him with a lot of head and neck post cancer reconstruction work, as well as digital reimplantation, in addition to general plastic surgery, such as breast implants.

“I still do a lot of skin cancer work, lumps and bumps and so on,” he adds.

A/Prof Kremer continues to run his general practice surgery in Bondi, where he works mornings, Monday to Friday.

Throughout his career, A/Prof Kremer was active in medico-politics, serving as treasurer of RACGP NSW&ACT, as well as President of AMA (NSW)’s Eastern Suburbs branch.

He became AMA’s representative to the Department of Veterans Affairs and travelled with former Prime Minister John Howard.

“I looked after him and quite a few other notable people. I had the honour of looking after Sir Roden Cutler until he died.”

A/Prof Kremer also served in the Reserve and retired as Medical Director Services Army. He was given the Centenary Medal, as well as an Order of Australia for his work with veterans and other associations.

Another passion of Dr Kremer’s has been the collection and restoration of antique medical instruments. He says he was ‘at the right place, at the right time’ to start collecting – when many senior surgeons were retiring and chucking out old instruments as new materials were being developed.

Prof Richard Gye, a neurosurgeon at Royal Prince Alfred and Dean of Faculty of Medicine, heard of his interest and asked Dr Kremer if he would help start a museum at Sydney University.

“One thing led to another and I was asked by the then Superintendent at Sydney Hospital which was in the process of being demolished and refurbished, if I would help to save their antique instruments. And every day I’d go in and they’d find something behind a wall or a fireplace that had been bricked up – we unearthed a tremendous amount of stuff.”

A/Prof Kremer was eventually approached by Dean of the Faculty at Sydney to start a new museum in the Charles Perkins Centre.

“I got deeply involved in that and I raised many millions of dollars to finance the thing.” Dr Kremer was made an Adjunct Associate Professor and for the last eight years has helped create one of the largest medical museums in the world. He also has one of the largest collections of medical instrument catalogues.

“So one thing leads to another,” he says. “I’ve had a fairly interesting life.”