COVID-19 Vaccine Rollout: At the coalface 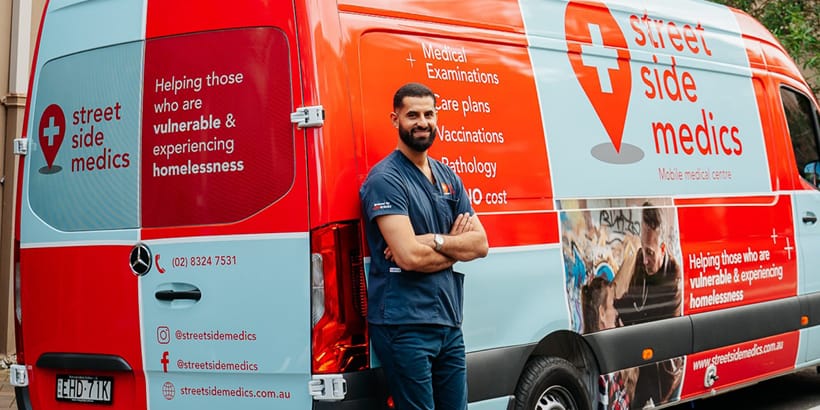 Street Side Medics is tackling the healthcare needs of Sydney’s homeless community by overcoming the barriers to access.

Dr Daniel Nour is a full-time PGY2 resident at Royal North Shore, but it’s his passion project – Street Side Medics – which takes up most of his time.

“I don’t necessarily need to go to every clinic, but it’s pretty hard to get me not to go. I love it.”

Street Side Medics is a not-for-profit organisation which provides a GP-led mobile outreach medical service for people that are either experiencing homelessness or are vulnerable.

The clinic operates out of a van that has been custom-fitted as a medical service with two different stations – a medical support officer station which acts as a triaging station and a GP station.

The mobile clinic, which was launched by Dr Nour last August, operates alongside well-established homeless services and shelters, and provides care to the growing homeless community in Woolloomooloo, Parramatta, Manly and Brookvale.

Street Side Medics recently procured a second van donated by LSH Auto Australia but is in desperate need of volunteers to help them expand their outreach.

They currently have about 145 volunteers, of which about 25 are medical professionals. But the clinic is centred around general practitioners.

“It’s a GP led service, so we really rely on them. The only thing that has limited our growth is trying to get more GP volunteers,” Dr Nour says.

The commitment doesn’t need to be onerous.

“Really all you need to do is come to the clinic for three hours and that’s it – we do the rest. Some GPs say they’d really like to commit every fortnight or every week – we can always work around their schedule, but it’s a minimum of 3 hours a month.”

How does it work?

Street Side Medicine takes its van to existing food services and homeless shelters three nights a week. The mobile clinic has a no-turn-away policy and provides a walk-in service for the homeless, who know where and when the van will be every week.

“This allows us to improve the catchment of patients and build rapport with them as we attend to their acute and chronic healthcare concerns,” Dr Nour explained.

There are two teams of volunteers. The team outside the van, which usually consists of a social worker, physiotherapist, dietician and other general volunteers, approach individuals to see if they have any health issues. Inside the van, there is a general practitioner and a nurse, or other medical practitioners.

The van is set up with all the common facilities necessary for a general practice, including medical examination, basic pathology, and minor surgical procedures.

In the past 12 months, Dr Nour says they have seen “some weird, wonderful and amazing medicine” – people making do with what they have.

But Dr Nour adds, “most confronting are the health issues that have been neglected for many, many years that were easily preventable or somewhat treatable. We see people with diabetes that has gone untreated for years and the complications associated with that.

“And there are more subtle things like thyroid issues, skin cancers … I remember a guy who came to me with haematuria – blood in his urine, and he said, ‘I figured it was just because it was getting cold.’ So, one of the things that we’re trying to change is health literacy.”

Dr Nour recently treated a 29-year-old man who has been homeless since age 13. The man had a severe phobia of being indoors due to childhood trauma, but he came to the van to ask for some wound dressings. After chatting with the man, the doctor on duty discovered he is a Type 1 diabetic and hadn’t been using insulin for the last four months. His blood sugar was 33 but his ketones and PH were normal. As a result of his fear of being indoors, he refused to go see an endocrinologist. After dressing his wounds, the team found out which medicine he normally takes and asked him to come back next week. When the man returned, they gave him the medicine and a glucometer. The team worked with an endocrinologist to develop a plan and organised a telehealth consult. The endocrinologist recommended a Freestyle Libre Sensor to help him keep a track record of his blood sugar. Since then, the man’s wounds have healed, his blood sugar levels have dropped and he’s on a much better trajectory. They’ve also referred him to an ophthalmologist for his diabetic retinopathy.

“We’ve built good rapport with him, and he trusts us enough that we’ve made a referral for the endocrinologist and the ophthalmologist to see him in clinic. That is big achievement for him.”

The success of Street Side Medics is dependent on trust and respect, Dr Nour says.

“A lot of times they come in and they might not tell us about three quarters of the problems that they’re having. But they get to know us, they appreciate the way that they are spoken to, the care that they are provided – they build trust. Not only with the doctor but with the service. And they tend to come back with more healthcare concerns.”

Dr Nour was motivated to start Street Side Medics while undertaking an elective at the Imperial College of London. He recalls coming to the aid a homeless man having a seizure. After speaking with the man’s friends, they indicated the man – who doesn’t drink or do drugs – had had several seizures over the previous months, but usually in the back lane.

“And I remember thinking, why hasn’t anyone taken him to see a doctor or a GP? And this one lady, I’ll never forget her face, saying ‘Daniel’, and this is her words not mine, ‘Daniel, the NHS barely cares about you, let alone us’.”

Upon returning to Sydney, Dr Nour conducted his own research into healthcare services for people experiencing homelessness and found that barriers include lack of awareness of available services, prohibitive costs, lack of transport, the level of documentation required, stigma and embarrassment, previous negative experiences, and distrust.

“The only real way to alleviate those barriers is, in my opinion, to take the service to them and be an opportunistic service.

“There really is no GP-led mobile outreach service and there certainly is none that have the capability of ours … I look at people’s risk factors for diabetes and I can actually tell you within five minutes if you have diabetes. And if you do have diabetes, I can actually give you the medication so we can start treating it.

“This gives people positivity – we know what’s wrong and we’re starting to fix it.”

Medical practitioners interested in volunteering with Street Side Medics are encouraged to email: volunteer@streetsidemedics.com.au or call 02 8324 7531.