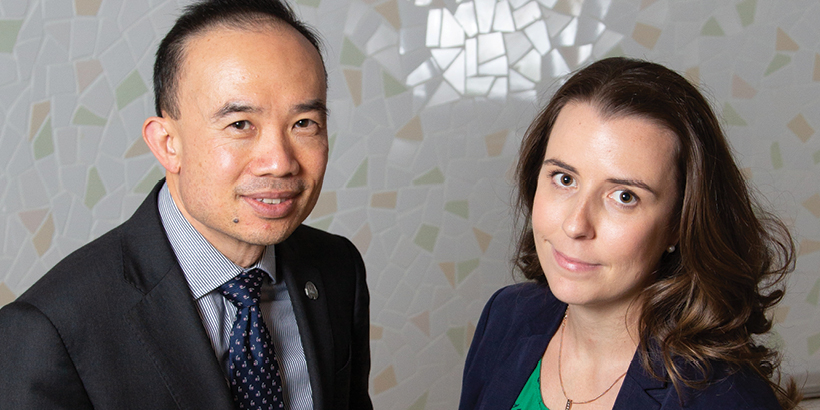 One of the nation’s most recognised general practitioners, Dr Kean-Seng Lim, has taken over as President of AMA (NSW).

WHEN YOU are the President of AMA (NSW), the phone starts ringing about 7am most weekends with requests to respond to morning radio. Journalists tend to ring the AMA looking for comment on anything deemed ‘health-related’. And while that may include hospital funding, private health insurance, or mandatory reporting, it is just as likely to be a request for comment on NRL players overdosing on prescription medication, or a response to Kendall Jenner smoking a cigarette in the nude and posting the photo on Instagram. In short, you have to be ready for anything.

Which is why, Dr Kean-Seng Lim, who was elected President of AMA (NSW) on 15 May is unfazed by the new job requirements.

“In general practice you could be faced with literally anything,” he says, adding that the variety of the discipline was quite daunting when he first started practicing. But now – after more than two decades of welcoming new patients to his practice in Mt Druitt – he is a master at being prepared for the unexpected.

His ability to quickly understand an issue and respond to the situation at hand will be an asset as he focuses on leading AMA (NSW) over the next two years.

Dr Lim warmed up for the role by serving as Vice President from 2016 to 2018. He is taking over the top job from Prof Brad Frankum and plans to continue to focus on some of the same public health issues that AMA (NSW) campaigned on under Prof Frankum’s leadership. Topping his list of priorities is overweight and obesity, with a special focus on childhood obesity.

Dr Lim says his interest in this issue goes back more than 20 years.

“Back in 1995, a few of the local GPs got together to talk about how we were going to manage our overweight and obese patients. At the time, we reflected on how difficult it was to achieve any sort of sustainable change. The frustration around the table was evident. It became clear that applying the standard medical model of educating patients one-on-one was not really getting us anywhere, and we needed to do something different. That’s when we started to look at the whole social ecological environment in western Sydney. We started to talk about how to reach out into the community, partnering with schools. We talked to Dr Smita Shah, and that’s when SALSA (Students as Lifestyle Activists) was born.”

Western Sydney has some of the highest rates of overweight and obesity in Australia, with more than half the population of Auburn, Blacktown, Holroyd, Parramatta and the Hills District overweight. Dr Lim’s patient base reflects these statistics and over the last 20 years he’s had to purchase equipment at his practice to accommodate heavier patients – upgrading the scales from 130kg, to 160kg, and then to 200kg. They now use scales weighing up to 250kg.

The prevalence of patients with chronic conditions has increased in direct correlation to the number of patients who are overweight and obese. In Sydney’s western suburbs, about 300,000 of the one million people living in that region are conservatively estimated to have diabetes or be at high risk.

People living in Blacktown are three times as likely to develop diabetes as those living in Mosman.

Certain groups are at higher risk of developing type 2 diabetes. These groups include Indigenous people, people from Asia and Pacific Islands heritage, people with mental health problems and women in their childbearing years. Many of these groups are strongly represented in western Sydney. The area is also considered to be a diabetogenic environment – which is one where the population, community, local economy and built environment make it difficult to have a healthy lifestyle.

The threat of diabetes and other chronic conditions associated with overweight and obesity was a catalyst for Dr Lim to transform his practice in 2012 to meet the needs of these patients.

An infrastructure grant, made available under the Rudd Government, helped facilitate this transformation.

“At the time the grant was made available, our practice was at a crossroads and we had to decide whether we wanted to continue being a small three or four doctor practice in outer western Sydney, or whether we were going to do something different. So this led to a bit of a journey of discovery. We decided to change,” he explains.

Dr Lim examined various models of care from around the world. He was also heavily influenced and supported by his Primary Health Network – WentWest, which has been working for health system reform with a focus on delivering high quality, integrated primary healthcare, with general practice at the centre.

Dr Lim restructured his practice and created an integrated, multidisciplinary team comprised of a dietician, exercise physiologist, psychologist and clinical pharmacist. The team sometimes sits down with patients at the same time or consecutively and works together to establish a unified approach to treatment.

The real game-changer for Dr Lim, however, was when his practice started looking at the aggregated data of his practice. WentWest gave Dr Lim’s practice licence to use a clinical audit tool, which suddenly lifted the veil on their patients. They were able to see who their patients were, what conditions they were suffering from, and how well or how poorly managed they were.

“This was actually our lightbulb moment, in that it allowed us to take a helicopter view of how our practice was really doing and look at areas where we could improve.”

He adds, “Since we’ve started using the clinical audit tool, we have become more sophisticated in our use of the tool, which allows us to view our performance at various levels, from process levels to clinical outcomes, that allows us to implement programs to try and improve things where they need to be improved.”

The data has driven improvement – not only by highlighting areas where the practice needs to focus, but by giving the practice team positive feedback on their efforts when they do see patient progress over time.

The results speak volumes – 85% of Dr Lim’s diabetic patient population are now experiencing good or reasonable control of their condition, which is a greater than 30% improvement since 2012. His patients are recording similar results with blood pressure and cholesterol control and the optimal use of medication.

“Part of our success has been developing that partnership between patients and our practice team. One of the great things is when patients report to us that they feel part of the family when they come in, calling the practice their ‘second home’. This engagement of patients is what helps to achieve better outcomes. This is what the Medical Home is all about.”

Dr Lim’s innovative work, along with his involvement in a schools-based obesity prevention and lifestyle education program in western Sydney, helped earn him the RACGP’s top honour in 2015 as ‘GP of the Year’.

Aside from tackling overweight and obesity, Dr Lim would like to focus on integrated care during his presidency.

“I think the most complicated issue facing healthcare at the moment is the siloed nature of healthcare,” he says. “We see too many patients who fall through the gaps between different services and that continuity of care is not managed across the whole spectrum of illness.”

Dr Lim suggests a “top-down, bottom up approach” to changing the system.

“One of my disappointments with the system is that there has been a lack of strategic direction in healthcare. And from the bottom up perspective, there does need to be a process of change and transformation at a small practice level.”

Dr Lim considers general practice to be somewhat of a bellwether in terms of the impact of health policy. This vulnerability is one of the reasons he was motivated to not only get involved in medico-politics – but lead the debate.

“One of the worst things about general practice is that it is greatly influenced by the way everything else works around us. It is harder to provide a good service in a dysfunctional system. In order to be able to provide a good service and make a difference, we actually have to modify the system around us and that’s where the medical policy comes into it. It is not good enough to be a good doctor in your own practice. You actually have to be able to create a good system around you, to be able to do the best that you can to make the best use of all our own personal resources.”