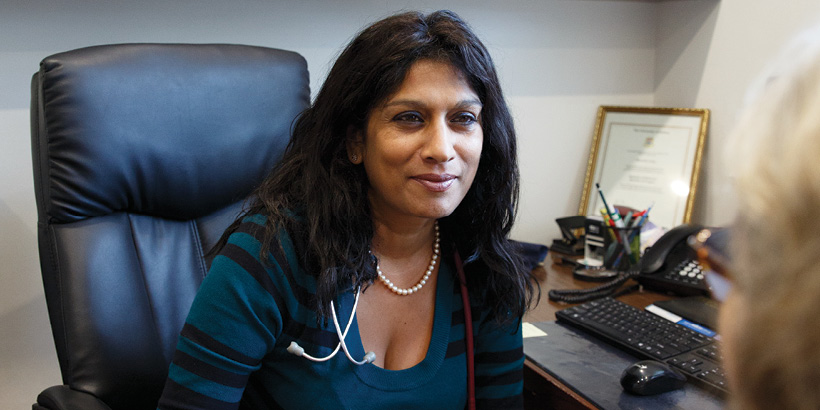 Dr Barri Phatarfod, GP and President of Doctors for Refugees, urges medical professionals to fight for the healthcare needs of asylum seekers and refugees.

This was the overriding message from the World Medical Association at its inaugural meeting in 1947, when in the aftermath of World War II, documented gross human rights abuses perpetrated by medical practitioners at the behest of their government were revealed.

Many doctors also have this message reinforced on a daily basis, as anyone who has worked in the prison system will agree. Our job, our duty – our very oath – requires us to put aside personal views and treat the patient as best we can.

So what to make of the current situation in Australia regarding asylum seekers and refugees when the politics spill over into our domain, telling us how and whom we can treat because of a political agenda?

The crisis in the offshore detention system and especially Manus Island is currently getting a lot of coverage, in part because for the first time cameras are able to document the scenes and conditions there. But in fact, many of the detention centres have been operating this way for almost two decades. The centres of Woomera, Curtin, and others have been described as hell holes and a brief search of these reveals shocking videos secretly recorded. There have been around 650 deaths in Australia’s detention system since 2000, and less than half have been reported to the Coroner due to a technicality regarding State versus Federal jurisdictions.

Many community and legal groups have long advocated for improved human rights in the refugee detention system, but politicians have used asylum seekers – particularly those coming by boat – as a wedge issue to polarise opinion. However, as doctors we have a distinct advantage: Australian law allows for everyone to obtain a second opinion on the healthcare they receive. In 2011, the AMA policy on refugees and asylum seeker health reinforced the concern of doctors regarding this flagrant abuse of human rights.

While the AMA has faithfully adhered to this platform, it is unrealistic and probably unfair to expect it to focus solely on refugee healthcare, so this was how our group, Doctors for Refugees, started. We formed through the AMA Council of General Practice (AMA CPG) in 2013 when I was the NSW representative, and others on the AMA CGP voiced their abhorrence at what was happening. Our platform is the same as that of the AMA and our focus is solely on healthcare needs. We are qualified to provide that second opinion and within our membership we cover a range of specialties. It’s worth remembering that we formed our group during a Labor Government and we are completely non-partisan.

One of the first cases we successfully advocated for was that of an 11-year-old boy who sustained a double fracture of his forearm when he fell off his bicycle in Nauru in 2015. The hospital plastered it up and sent him on his way, but after two weeks when he still experienced debilitating pain his mother contacted us with his X-rays. Doctors for Refugees obtained the opinions of various Australian specialists, including paediatricians, orthopaedic surgeons, radiologists and emergency physicians, who all reached the same conclusion: this boy needed an urgent surgical repair (ORIF) to avoid permanent disability and that the time to do this had almost passed. When the Immigration Department essentially fobbed us off, with the permission of the boy’s mother we went to the media – complete with the X-ray. The result was quite astounding. Within a week the Government flew an Australian orthopaedic surgeon (and an entire operating theatre) to Nauru to do the requisite surgery on this young boy. The absurdity of this expense aside, this appeared to be a successful outcome and almost immediately our group was inundated with requests from others to similarly assist them. We currently have over 300 cases that we are reviewing and as a completely volunteer group, it is hard to meet this demand.

Yet the cases, which include untreated tumours, heart attacks, machete attacks, and gang rapes are hard to turn away from. Some of the cases we have assisted with this year include having a pregnant woman with pre-eclampsia and breech presentation brought to Australia for caesarean section, and a young man with arrhythmia having a pacemaker fitted, after the advice of three separate cardiologists to do so were ignored by the Australian Government. Both these cases, among others, were extensively reported in the media which was ultimately how they were able to get treatment. We will only release de-identified details with the patient’s written consent.

The cost of the offshore detention system has been reported at between $5-$9.6 billion for the last five years. Comparing this with the $1.2 billion to upgrade Campbelltown, Nepean and Concord hospitals combined or the $130 million to build and maintain the University of Canberra Hospital puts this outrageous figure in perspective. For doctors who watch patients struggling to pay for medication and other costs, this factor itself should see our strongest condemnation.

The intrusion of politics into doctors’ medical work reached its zenith when the Government introduced the Australian Border Force Act in 2015. The secrecy provisions contained in this were in direct conflict with the AHPRA guidelines of patient advocacy – the guidelines doctors had sworn to uphold. Many peak bodies, including the AMA, medical colleges, and the Lawyers Alliance, immediately called on the Government to reverse this Act or, at the very least, to exempt doctors. After a year of these calls being ignored, Doctors for Refugees, aided by the Fitzroy Legal Centre, challenged the ABFA 2015 in the High Court. Two months later the Government quietly introduced an amendment that exempted health professionals. After some discussion, our committee decided that freeing doctors from their ethical conflict was a welcome measure, but only part of the solution; the healthcare of refugees was still at risk while teachers, security guards, and others were still bound by this law, so we chose to continue on. In August 2017, the Government introduced another amendment, which we are currently discussing.

That the Government, with its massive legal and financial resources, could be forced to back down on its dearly held policy by a group of politically naïve doctors, armed only with our AHPRA Code of Conduct and assisted by a community legal centre, speaks volumes as to the paper tiger it really is.

It also reinforces the power that doctors hold when we stick to our core tenets.

Following our urgent letter regarding the escalating crisis on Manus Island upon the closure of the Regional Processing Centre, we travelled to Canberra in October to meet with several Parliamentarians.

They told us to work on changing public opinion. This is not our role. However, we can ensure that all doctors are informed of the conditions these individuals face. And we can remain united in our condemnation of this treatment.

Most of us became doctors, not just because of our interest in the science of the human body, but to uphold the principles of the sanctity of life – all human life. Currently, this is being violated, so now we face a choice: step up together, or be part of the shameful history that did and said nothing.

Volunteering with Doctors for Refugees is easy. No travel is required, just the ability to review medical records. Most referrals involve such egregious deviations from acceptable care that even the most junior doctor can identify this immediately. We are also self-funded and greatly appreciate any donations. Details can be found on our website.