Part of the solution 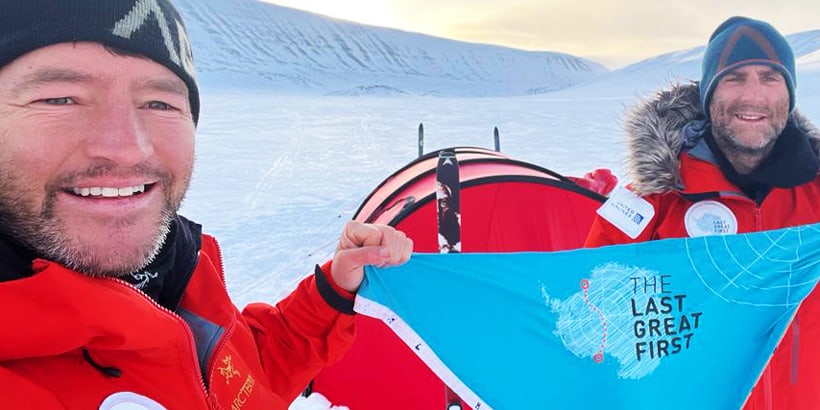 The golden sands of Manly are a world away from the frozen interior of Antarctica, but the beach provides an ideal training ground for Gareth Andrews.

The 40-year-old consultant anaesthetist at St Vincent’s Hospital in Darlinghurst pulls four-wheel-drive tyres along the sand for up to six hours, several times a week, to simulate the 200-kilogram sled he will drag across 2600 kilometres of snow and ice later this year.

Dr Andrews said the training regime – a crucial part of the preparation for the 110-day trek across Antarctica – attracts the odd stare as well as unsolicited advice.

“You’ve misinterpreted the wheel – that’s my favourite one,” he said. “You should just buy a car mate, which is a common one.”

Dr Andrews is also working out at the gym and eating eight meals a day to add 10 kilograms to his already muscular frame ahead of The Last Great First, which he will undertake in October with fellow medic Dr Richard Stephenson.

Dr Andrews drinks spoonfuls of olive oil to boost his calorie intake, but still has to eat every two or three hours.

“It’s really difficult when you’re an anaesthetist and stuck in theatre all day and not able to get out for a food break,” he said. “The eating is a full-time job.”

The doctors were invested as members and ambassadors of Scouts Australia in Canberra by Governor-General David Hurley.

They follow in the footsteps of Antarctic explorer, Sir Douglas Mawson, who was awarded the Silver Wolf scouting medal in 1915.

Both men credit their adventurous spirit to their childhood in the scouts. Dr Andrews, who grew up in Scotland, said he learnt to use a compass, abseil down a cliff, paddle a canoe and tie knots as a scout.

“I think scouts can open the eyes of young people everywhere to an outdoor world of fun and adventure whilst learning incredibly valuable life skills, and I want my kids to have that opportunity,” Dr Stephenson said.

The Last Great First expedition will be an unsupported, coast-to-coast ski crossing of Antarctica.

Dr Stephenson, an emergency doctor at Dunedin Hospital in New Zealand, and Dr Andrews will burn 7000 calories a day, hauling sleds containing all their food and equipment across the frozen Antarctic landscape.

“If successful, it will be one of the greatest feats of human endurance ever achieved,” he said.

It is also risky. British explorer Henry Worsley died in 2016 while attempting a solo, unaided crossing of Antarctica that was inspired by Sir Ernest Shackleton’s doomed expedition a century earlier.

Drs Andrews and Stephenson expect to encounter howling winds up to 200 km/h, frequent polar storms and temperatures as cold as -40 degrees during the expedition.

They will begin at sea level on the edge of the Ross Ice Shelf, skiing about 25 kilometres a day into headwinds as they climb 2850 metres through the Transantarctic Mountains to the South Pole before finishing at Gould Bay.

The training is designed to give the adventurous doctors the strength and endurance to pull a 200-kilogram sled or haul it out of a crevasse while withstanding the inevitable wear and tear on their bodies.

However, the pandemic was an obstacle, with both men forced to put the expedition on ice to focus on their work as doctors.

Dr Andrews was living in Wales in 2020, which he said was hit hard by the COVID-19 crisis: “There was no capacity for anything else apart from going to work to treat patients and be there for your colleagues and family.”

On days off, he dragged tyres up and down the laneway outside his house in Cardiff, staying within the five-kilometre limit imposed during lockdown.

The logistics of the expedition are mind-boggling – nothing has been left to chance when it comes to equipment, clothing and communications, which explains the $1 million cost of the expedition, which Drs Andrews and Stephenson hope will attract sponsors.

“Weight is everything, so we literally cut labels off clothes, snap handles off our toothbrushes,” Andrews said. “We try to minimise weight as much as possible.”

Each day of the expedition will be meticulously planned – up at six o’clock to eat breakfast and pack up the tent before 10 hours of skiing from 8am to 6pm.

Dr Andrews said evenings will be consumed with setting up camp, communications and boiling water – no easy feat in subzero temperatures – and perhaps an hour of reading, writing or listening to music before a strict 10pm bedtime to ensure eight hours of sleep.

“Gareth and I have spent a lot of time in tents together already,” Dr Stephenson said. “We know we work really well as a team and perhaps, more importantly, get on really well even when the going gets tough.”

With no supply drops, the duo must carry 110 days’ worth of food on their sled, eating specially prepared dehydrated meals or, as Dr Andrews put it, “food in a bag. Just pour boiling water on it and off you go.”

A hearty menu of spaghetti Bolognese, lasagne, curries, dahl and chocolate pudding will fuel the expedition, although Andrews estimates the duo will each shed about 20 kilograms during the three-and-a-half month trek.

There will be no hot showers either, with the doctors relying on alcohol hand rub and wet wipes to maintain personal hygiene and avoid illness.

“Coughs, colds, getting infections are really detrimental and can even be expedition-ending,” Dr Andrews said.

Toilet stops will be done “very quickly”, he said. “There’s no secret formula.”

They will also have to carry out any rubbish except for human waste. “In the grand scheme of things, in the immensity of Antarctica, the impact of our human waste will be vanishingly small,” Dr Andrews said.

Both men believe the psychological challenges will be as intense as the physical demands of the expedition.

“Just the ability to get out of the tent every day and perform at your best even though you know it’s going to be really tough,” Dr Andrews said. “It’s going to be cold, and your sled is really heavy, and you’re really tired.”

But a decade of arduous expeditions to the North Pole, and across Greenland, Iceland and Svalbard gives Dr Andrews confidence in their physical stamina and mental fortitude.

“Over three-and-a-half months, you’re going to have some bad days and some good days,” he said. “It’s how we manage those as a team together that will get us through.”

For Dr Andrews, the hardest days will be missing wife Andrea and his kids Lucia, five, and two-year-old Arthur, but he said: “It’s always a fleeting thing.”

Dr Stephenson said separation from his family is the hardest aspect of the expedition: “If we can stay strong psychologically, we put ourselves in a much better position to meet the physical challenges and push through when the going gets tough.”

The duo will collect climate science data during the expedition such as surface pressure, temperature, magnetic field information, ice surface data and even cloud patterns that Stephenson said is “surprisingly difficult” for satellites to record.

“We will be traversing areas very rarely or never before crossed by humans and even with modern remote sensing technology there simply isn’t a way of gathering truly accurate data without the instrumentation physically on the ground that we will be carrying with us,” he said.

However, Dr Andrews said: “It’s not lost on us that it’s a selfish pursuit, and we’re putting ourselves in harm’s way.”

“Both Rich and I have beautiful families and young children and they’re the centre of our world,” he said. “But this journey has been with Rich and I for 10 years and our adventuring, it makes us the people we are. I truly believe it makes us better husbands, better fathers, better people.”

Reprinted from The Sydney Morning Herald, Written by Andrew Taylor