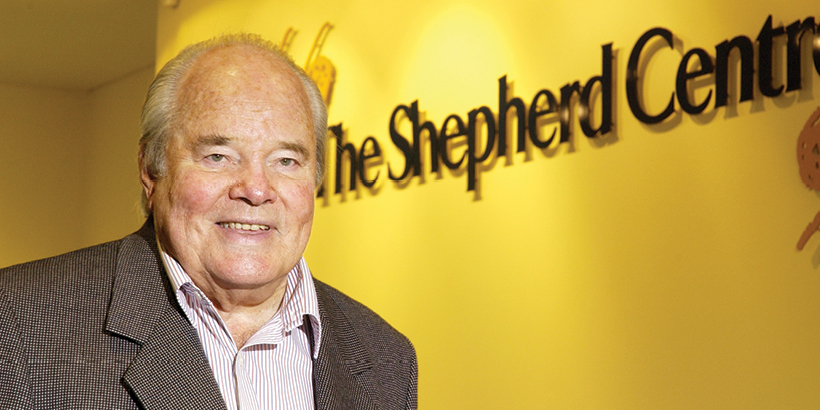 AMA mourns the loss of one of its most well-known leaders, Dr Bruce Shepherd AM – a pioneer for services to support hearing impaired children and firebrand in medico-politics.

DR BRUCE SHEPHERD AM, who passed away in late May at the age of 85, was described as a visionary, a passionate advocate for the medical profession, and a pioneer on behalf of services for deaf children.

Friends, family and colleagues gathered at a memorial held in June to remember the highly respected Orthopaedic surgeon.

“Bruce was superb at taking down old arthrodesed hips. Faced with a mass of bone, making the first cut in the bone at the right level and angle was critical. Seeing the master at work must surely have been a great experience for the orthopaedic registrars whom Bruce trained.”

His exceptional talent as a clinician saw him work at many prominent hospitals including Auburn, Mona Vale and the Royal Prince Alfred in Sydney. He later established his practice in Bowral.

Beyond his clinical practice, he was a tireless advocate for the profession, serving as AMA (NSW) President from 1988 to 1990 before moving on to become AMA Federal President. He was also the founder of the Australian Society of Orthopaedic Surgeons (ASOS) and the Council of Procedural Specialists (COPS), and a President of the Australian Orthopaedic Association.

He added, “Bruce played politics tough and without fear.”

Dr Shepherd was well known for leading the NSW Doctors’ Dispute against the Wran Government, which threatened doctors’ autonomy.

At the time, Dr Shepherd said, “I’ve discovered politicians only respond to force, and that’s very sad. That’s why we’ve had to do what we have.”

“I worked with him for over 30 years. We had few disagreements and none that weren’t quickly resolved. He was a constant source of support, encouragement and inspiration.

We never had a formal contract between us but had a relationship of trust and personal understanding. I will miss him greatly. Together, and with his colleagues’ support, we dealt with many serious issues confronting the medical profession, but Dr Shepherd never lost his sense of humour and good cheer. He was an exceptional leader who believed that freedom meant taking responsibility and taking action. He was a builder and a visionary who devoted the best years of his life to the welfare of others. Goodbye Bruce, we will miss you, but we will never forget you.”

In addition to being a highly respected leader in medico-politics, Dr Shepherd is well-known for founding the world-leading children’s charity, The Shepherd Centre, which he established with his late wife, Annette.

Dr Shepherd was motivated to find alternative methods of intervention for children with hearing loss after both of his children, Penny and Danny, were born profoundly deaf.

At the time, children with hearing loss were often sent as boarders to special schools for the deaf where they were taught sign language and were isolated from their families and the hearing world.

Keen to find alternative methods, Dr Shepherd travelled to the US to attend a summer program at the John Tracy Clinic in LA. Enthused by the methods being used overseas, Dr Shepherd returned to Australia to establish ‘The Council for Integrated Deaf Education’ at Sydney University, which later became known as the Shepherd Centre.

It was the first agency to teach ‘Auditory-Oral Therapy’. Dr Shepherd also lobbied the Government to introduce the NSW State-wide Infant Screening Hearing (SWISH) program, which was established in 2000 and expanded nationally.

His tireless advocacy on behalf of children with hearing loss and their families has helped make Australia one of the best places in the world to be born deaf.

Dr Shepherd was awarded an Order of Australia (AM) for his efforts in deaf education, teaching deaf children to speak and enabling them to attend mainstream schools with full integration.