Before COVID, AMA (NSW) Council members often started Council meetings with a little game they liked to call, ‘Where in the world is Michael?’

DR MICHAEL BONNING, chair of the AMA (NSW) Council, is notorious for dialling in from far-flung locations around the world.

“I once did a Board meeting walking down in the Himalayas from Tengboche, Nepal,” he recalls.

“I always felt as long as I had phone signal I could probably dial in from anywhere.”

Between working as the chief medical officer of Inspired Adventures and spending 12 years as a medical officer with the Royal Australian Navy, Dr Bonning has traversed across Southeast Asia, the Middle East, North and South America, the horn of Africa, most of Europe, Pakistan, India, several Scandinavian countries … if you throw a dart at a map, there is reasonable chance he’s been there.

COVID might have grounded Dr Bonning to Australia, but it hasn’t stopped him from leading hiking expeditions – in May, he took a group across the Larapinta Trail in the Outback to raise funds for Interplast Australia, a non-profit organisation that provides plastic and reconstructive surgery in countries across the Asia Pacific region.

When he’s not trekking across deserts and some of the world’s highest peaks, Dr Bonning works as a general practitioner at Balmain Village Health, as well as the Inner West Respiratory Clinic and the vaccination service at Sydney Olympic Park.

In addition to serving as Chair of the AMA (NSW) Council, he currently sits on the Board of GP Synergy as Deputy Chair, is a Community Panel Member of Ad Standards, the medical advisor for DermaSensor, Adjunct Fellow of Macquarie University, and Non-executive director of Postgraduate Medical Council of Queensland.

“I find general practice has so much inherent opportunity in it. It allows me to do so many things and it’s a great platform to step into other parts of healthcare, technology, advocacy, military service – it all connects together.”

General practice might provide the vehicle for these pursuits, but Dr Bonning credits his drive to his family, particularly his twin sister.

“We grew up together, played sport together, went to school across the road from one another, and both of us are intrinsically driven…

“We do very different things, but we do push each other along and we want to see each other succeed,” he adds.

Whereas his sister went into finance, Dr Bonning was drawn to science. He completed his undergraduate degree in science at the Queensland University of Technology in 2005.

Inspired by the military service of his grandparents, he applied for the Royal Australian Navy’s Graduate Medical Program and subsequently enrolled in the University of Queensland’s medical school.

Throughout med school, Dr Bonning was heavily involved in student politics, and in 2007 he was elected President of the University of Queensland Medical Society (UQMS) in his third year of medical school and then President of Australian Medical Students’ Association (AMSA) in his final year. He also served as Chair of the Ashintosh Foundation, the charitable society of UQMS.

“I’m a joiner. I’m someone who likes to be part of a big organisation because when you work with others and you have a shared purpose, you can achieve a lot more than any individual.”

His commitment and enthusiasm for medico-political advocacy and his academic achievements did not go unnoticed. Dr Bonning was awarded the Dr Magdalene Brodie Memorial Prize for Paediatrics and made Valedictorian of his graduating class in 2008.

During this period, Dr Bonning says he was both encouraged and inspired by Professor John Pearn, a paediatrician and former Surgeon-General of the ADF, as well as past-patron of UQMS.

“He always encouraged and supported my goals in medicine and the military.”

He received a leadership award during his stint at HMAS Creswell and recalls the proud moment of being made Commanding Officer for the Ceremonial Sunset, a naval tradition of saluting and lowering of the Ensign at sunset.

“I still have the sword used to command the platoon from that day … and giving the order to fire a cannon was cool too.”

Beyond medical school and officer training, Dr Bonning continued to serve as medical officer with the Royal Australian Navy and was involved in fleet operations including border protection, as well as counter terrorism and counter drug smuggling operations in the Middle East, and humanitarian and training missions in Southeast Asia and the Pacific Rim.

He helped organise medical and healthcare support for dozens of nations who brought ships to Australia for the International Fleet Review.

He also had the opportunity to mark the ANZAC Centenary on the Greek Island of Lemnos near Gallipoli.

Despite these highlights, there were challenges during his service with RAN and Dr Bonning is open about the psychological burden he carried while conducting border protection activities, acknowledging he struggled morally and with his own mental health.

“The purpose of a sovereign navy is to defend borders, protect shipping, prevent smuggling, and to keep the waterways safe. But to intercept and turn back or detain people who are trying to escape places that are not as nice as Australia… it’s just through simple luck that I was born in Australia and therefore have privilege and opportunity that few others in world history have ever had – and to stand there and be someone that turns other people who may be in less fortunate situations around is hard.”

He adds, “At no other time in my service did I feel there was a conflict between being a medical officer as well as having a Hippocratic oath to uphold, but that was a difficult time.”

Being a medical officer onboard a military vessel also comes with its own unique clinical challenges.

Dr Bonning describes the medical and logistical challenges of being 900 miles from land and dealing with a patient with acute appendicitis; and in another scenario, flying a patient with intracranial pathology by military helicopter to New Caledonia and trying to coordinate care with doctors who only speak French.

Coupled with these obstacles is that all of these patients are colleagues and friends.

“The thing about being a military doctor, especially a navy doctor, is you are essentially a small-town GP because you know everyone.”

His medical career afforded him learning opportunities that lent itself to expedition medicine. Or as he describes it, “you get taught in how to manage yourself in an environment where things fall apart under pressure and without support.”

Since it was founded in 2001, the organisation has raised $38.6m for 300 charities and taken fundraising trekkers around the globe, including treks in Mt Kilimanjaro, the Great Wall of China, Nepal, the Inca Trail and more.

He says he was drawn to Inspired Adventures because it connects people with causes that they support and for many people, having a humanitarian motivation often pushes them to their outer limits.

“When people trek on behalf of an organisation or a cause that is bigger than themselves, they put themselves out there to do things they never thought they could and that is incredibly rewarding to see.”

THE POWER OF PEOPLE

Dr Bonning joined AMA on 24 January 2005 – he remembers that day as it was the second day of O Week during his internship.

“As I’ve said, I’m a joiner. I joined the AMA, I joined my medical student society, I joined AMSA, I joined the military…I’m a huge believer in collective action – or the will of an organisation supported by thoughtful people who are all pulling in the same direction for a better, healthier future.”

Central to his motivation for participating in medico-political advocacy is the belief that doctors need to have a say in the system they work in.

“Engaging doctors to help construct the medical system they work in is absolutely essential for the system to work,” he says.

According to Dr Bonning, the value of having a professional association like the AMA is its shared sense of purpose and collegiality.

“Sometimes these jobs we do can be a bit lonely. I’ve had my own experience with loneliness – being the only doctor for hundreds of kilometres – and even within Greater Sydney or NSW you can feel like you are battling on alone in the health system. But there are genuinely friendly people out there to support you and listen and I think everyone needs that.”

Mental health awareness has been a prominent feature of Dr Bonning’s career – he spent six years (2008-2014) working as the Non Executive Director for beyondblue.

His involvement with the organisation was sparked by a chance meeting with beyondblue founder and former Victoria premier Jeff Kennett, who was invited to speak at the AMSA National Convention in 2008.

On the morning of the presentation, Dr Bonning happened to be on the ground floor of the hotel very early. The convention convenor spotted Dr Bonning and asked him to look after Mr Bennett for breakfast.

“Jeff and I had a fairly robust discussion about the mental health space and by the time we walked to the top of the stairs for him to speak in front of an audience of 1000 medical students he asked me join beyondblue as a director.”

Dr Bonning recalls a few weeks later he received a letter of invitation from the organisation which highlighted there was a director’s fee.

“I wrote back – I was very apologetic – I said, I’m very sorry but I’m a medical student – I can’t pay a fee to be on this Board.

“At my first Board meeting everyone laughed. It was the other way around, they paid me a small stipend to be part of the organisation.”

In 2009, Dr Bonning undertook a Churchill Fellowship to study methods of promoting wellbeing within the medical profession and in 2010, beyondblue conducted a $2m world-leading study on doctors’ and medical students’ mental health and wellbeing.

The research from that study became the basis for a reform agenda which has been taken forward by the profession.

When asked if he could cure one thing immediately, Dr Bonning doesn’t hesitate.

“We know there is an epidemic of loneliness. Lots of people like to be alone. But there is a difference between being alone and being lonely and I think we are caught in a growing wave of loneliness, and I think the pandemic has probably made that worse. And being a GP, a significant number of people come to see me because they are lonely.”

As Chair of AMA Council, his focus is on ensuring that Council has exposure to emerging issues such as the impact of technology, the role of private equity, value-based healthcare and overseas organisations taking an interest in Australian healthcare.

“The biggest issue facing doctors at the moment is the rapidly changing interface of healthcare with virtual care. Doctors need to work to ensure standards of quality in care are maintained and the positives of virtual care are made available to everyone in the community.”

Making a difference in a time of uncertainty 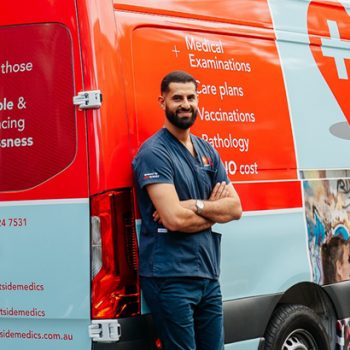